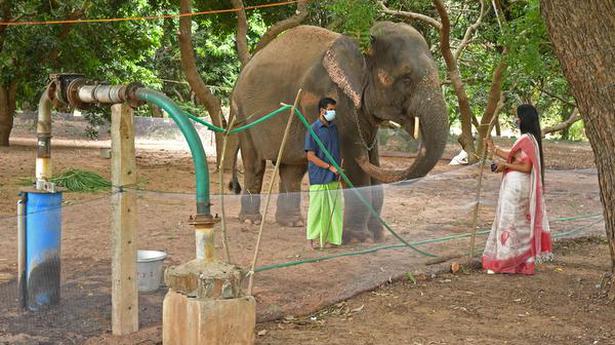 Translocated temple elephant yet to adapt to new habitat

The pachyderm is unlike most wild-to-capture animals: officials

Lakshmi, the popular elephant of the Sri Manakula Vinayagar temple, is taking time to acclimatise to the new habitat at the suburban Krishi Vigyan Kendra (KVK) campus and adjust to a new routine that involves a regimented diet and physical activity.

The elephant was relocated from the temple following a complaint by BJP Lok Sabha MP Maneka Gandhi to the Lieutenant Governor Kiran Bedi alleging repeated abuse of the animal and violations of the Prevention of Cruelty to Animals and the Wildlife Protection Act, 1972. The Directorate of Forests and Wildlife ordered the translocation of the elephant.

The 31-year-old elephant is proving to be very unlike most wild-to-captive animals according to a team of officials who are observing her health and behavioural modification.

“Lakshmi presents a unique character study. She is docile, completely domesticated and highly socialised and so used to being among humans nearly all her life that it would be difficult for her to cope with any other environment ,” says Vanjulavalli Karthik, Deputy Conservator of Forests, who is also a trained wildlife biologist.

In fact, the elephant has been among the most genial of animals at the annual Thekkampatti elephant rejuvenation camp in Mettupalayam.

The animal’s health and behaviour modification when reassigned to a near-natural habitat are the focus of the monitoring team.

Lakshmi is responding well to treatment for the ulcerated lesion on her left foot. In fact, the foot wound has been one of the issues raised in the past by animal rights petitioners, including the People for Ethical Treatment of Animals, to imply animal abuse.

While the elephant has revelled in dirtying herself in the mud, she has not taken kindly to any form of exercise, officials say. While elephants typically walk about 40 to 45 kilometres a day, Lakshmi reluctantly trudges about eight kms. “We’re trying to increase the distance gradually and improve metabolism,” an official said.

Meanwhile, the mahout says he is worried that the animal is not sleeping well. “Since coming here, she has been a bit lost,” Senthil said.

The team, which is monitoring the elephant’s progress every day, will undertake a holistic review of the rehabilitation after three weeks.

Officials are looking at a scenario where Lakshmi, once she is deemed fit and healthy, can resume life at the temple and undergo rejuvenation cycles at the KVK campus.